The Robitaille Families Coat of Arms 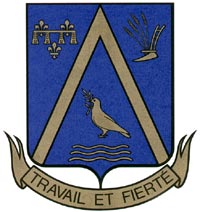 The official coat of arms for our large family was unveiled at a brunch held at the Monsignor Marcoux Centre on October 21, 1990. The coat of arms was designed by Reverend Lucien Godbout, a heraldist, from the Seminary of Québec.

The official definition of our coat of arms is as follows:

A blue background with a golden chevron accompanied by three lilies adorning a rod with four pendants; a plough, and four stalks of wheat; and, also, a dove holding in its beak an olive branch above three waves, all in gold.

(Translator's Note: This is a paraphrased version of the French text which is written in the formal language of heraldry.)

Why are all these items included? After some discussion among the members of the Board of Directors and with some of our members, we have put together the following explanations:

Father Godbout, who produced the complete description of the coat of arms after making changes that we suggested, said the following in his last letter:

« Thank you for your confidence and congratulations on a coat of arms that is simple, very balanced, highly symbolic, and clear. . »

And we, in turn, thank Father Godbout for his beautiful heraldic work. There remained the need for a motto to complete the coat of arms. A contest was organized for our members and an adjudication panel was formed to decide which of the proposals submitted was best. The motto selected was WORK AND PRIDE (TRAVAIL ET FIERTÉ), submitted by Mrs. Béatrice Robitaille Ferland.